12 ESD seniors recently earned the rank of Eagle Scout, many spending the majority of their scouting career together in the same troop. Remarkably, 12 translates to nearly one out of every four boys in the Class of 2019 earning the rank. Comparatively, approximately six percent of all scouts go on to achieve this prestigious honor. Congratulations to Will Beck, Reece Breaux, Trey Brooks, John Carrie, Miles Cavitt, William Greening, Luke Logan, Jackson Mechem, Scott Neuhoff, Cooper Newsom, Luke Stanford, and Christopher Talbot on this amazing honor! In total, these Eagles gave over 1,100 hours of service to the community.

Eagle Scout is the highest achievement or rank attainable in the Boy Scouting program of the BoyScouts of America. In order to earn the rank of Eagle Scout, these students completed all of the qualifications such as earning a specified number of merit badges, providing references, and completing a service project. Not only are they proficient in skills such as citizenship, swimming, and emergency preparedness, these students are also skilled in building decks, constructing eco-friendly garden boxes, and installing bike repair stations.

"During the project, I learned to adapt when things go wrong. The project gave me a chance to use the leadership skills I had learned through my years in scouting," said one Eagle Scout who volunteered at Operation Kindness, the largest no-kill animal shelter in North Texas.

"Completing my project had been a goal that I set for myself when I first became a Scout," said another, who volunteered at Cornerstone Crossroads Academy. "The reason I chose the project I did was because cars had been causing damage to the school's sports field and surrounding walking track as well as posing a threat to the students. I'm proud that I was able to combat this issue and make a difference for such a fantastic and deserving school."

"It was a very rewarding experience being able to help others by building something with our hands. This experience allowed me to organize and lead my peers which was invaluable to my Boy Scout experience," said another.

Will organized and led a crew of scouts to build two elevated 32-cubic-foot flower beds for the 5th-grade middle school science teacher and students of The Episcopal School of Dallas, making it possible for each science class to have their own bed.

Reece led a team of volunteers in building an animal therapy ramp and a raised, wooden platform for an outdoor storage unit in the physical therapy area for animals at Operation Kindness. These enable the physical therapist to spend more time treating more animals, which increases adoptions.

Trey designed and led a team to build a 25-foot bridge in Harry Moss Park for DORBA (Dallas Off Road Bicycle Association). DORBA relies on volunteers to maintain and repair the biking trails in and around Dallas.

John built a secure perimeter for a playground for Cornerstone Crossroads Academy, a south Dallas high school for at-risk students. He did so by burying guardrail posts and running heavy wire between the posts, allowing the field to be protected from vehicular traffic.

Miles designed and led a team of volunteers to build a bridge for pedestrians and small service vehicles at the Tulsa Boys Home. The bridge connects the ball fields to their campus.

William redesigned the sandbox on the Mi Escuelita playground. He led a crew of volunteers in demolishing the old, unsafe sandbox and building the new sandbox for the children to enjoy. Mi Escuelita avoided fines as a result of his project.

Jackson installed a bike repair station on the newest section of the Northaven Trail which will connect I-35 and Central Expressway with a walking/bike trail.

Scott designed, procured materials, and led a team of scouts to construct 10 cornhole boards for The Episcopal School of Dallas. These games are used to promote community and to improve Lower School students’ motor skills.

Cooper organized a team of scouts to make and install environmentally safe, non-toxic garden boxes for The da Vinci School, a LEED gold certified preschool in Dallas. The garden boxes compliment da Vinci’s outdoor environment and its focus on science and sensory exploration.

Luke designed and led a crew of scouts to build planter boxes for the Pre-Kindergarten classes at The Episcopal School of Dallas. The boxes became part of the outdoor exploration area, providing a space for young children to garden.

Christopher designed and led a crew of volunteers to construct a path adjacent to the quarry at The Episcopal School of Dallas. This path is used for outdoor education classes and provides easy access to nearby wetlands

Congratulations on this outstanding achievement, Eagles! We are so proud of your hard work and dedication. 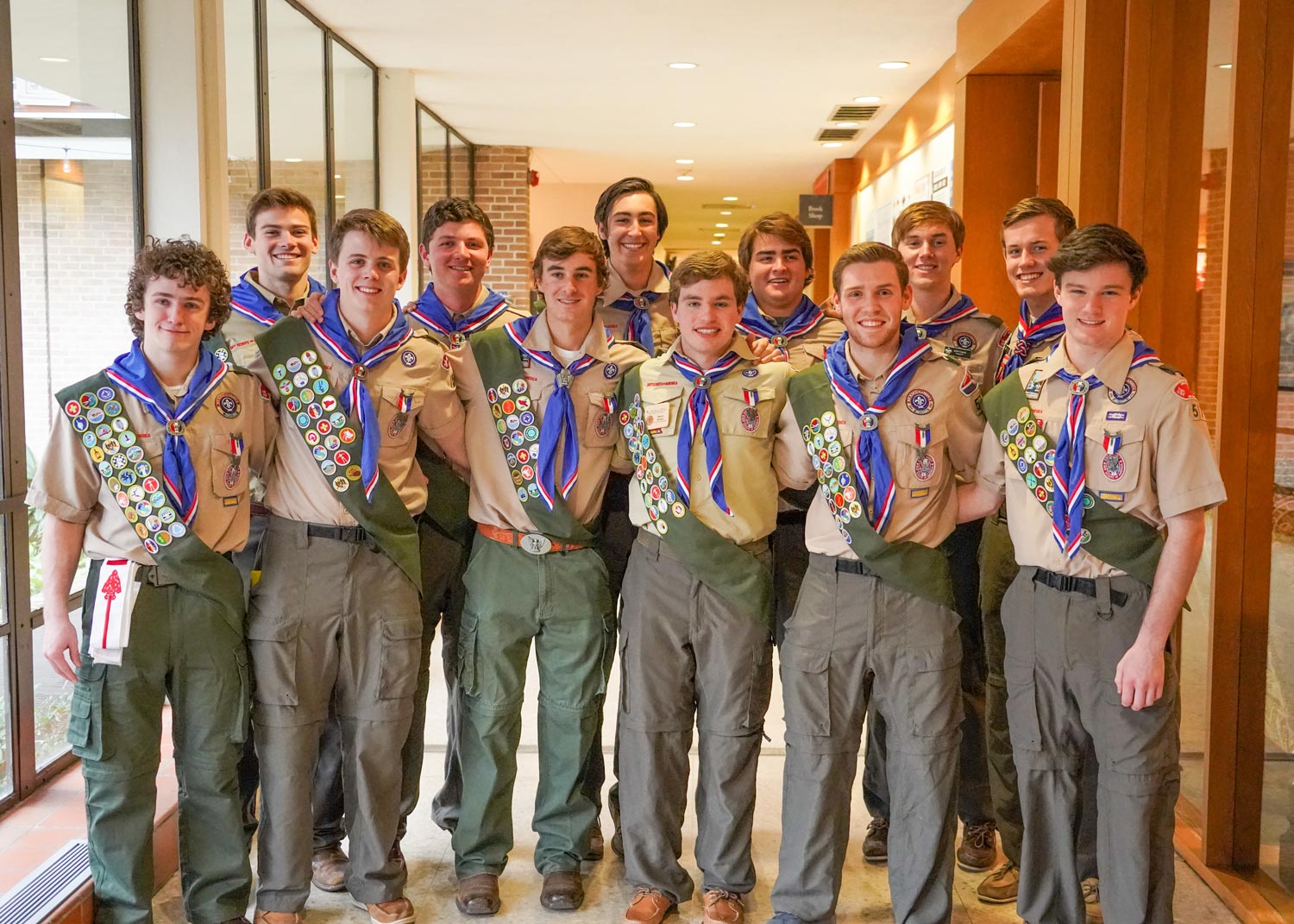